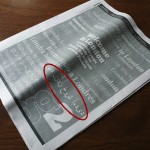 Imagine seeing a welcome poster for London Olympics saying: NODNOL OT EMOCLEW. Imagine it written in cursive connecting the wrong words to each other. Now Imagine the text written in Norwegian but targeted towards the English speakers. That is how the Arabic speaker audience are treated in the posters published by London Olympics.

Sometimes it is amazing to me how the producers of contents in different languages do not even bother checking their content with the speakers of those languages. There has been many occasions when I have seen Arabic posters, booklets, websites, and many other types of publications when the material in Arabic is ‘Gibberish’. This problem is caused by two assumptions: The first assumption is that all languages use scripts that are left-to-right, and the second assumption is that the letters in all scripts are separate.

The lastest of this type of mess could be seen in the work of people in charge of Olympics security poster. The security poster, of course is the one that has caught the attention of BBC but it seems the problem is not only in the security poster but in everything published for London Olympics. Look at this one-page ad in Guardian (Tuesday 17.07.12): The text in Arabic script is gibberish to Arabic readers for multiple reasons:

I see this type of Arabic gibberish all the time in movies when there is something Arabic in the background but one expects more from international organizations like Olympic committees(get offer).

Solution: Next time you want to create a publication in Arabic you might want to consider a simple solution: to Arabic/Persian publications check it with Alefba.

More on this subject: